The journey from the Link Trainer and the Celestial Navigation Trainer to VRgineer’s latest Virtual Reality training platform: ISLE-LMS

Ever since the invention of flight at the start of the 20th century, individuals, companies, and governments have been working to design and develop the means to safely and efficiently train pilots before they were turned loose for a solo flight. It is true that some of the earliest pilots were quite literally put in the cockpit on day one, as detailed in the diary of U.S. Army Colonel F.P. Lahm in 1909:

“On October 5th, we moved in, built a shed for the mechanic, set up the pylon and track, and Wilbur (as in Wilbur Wright – the father of flight) began our pilot training. At the end of about three hours’ dual, we were turned loose and made our first solo flights. A few days later I was considered qualified to carry passengers and did so.”

However, as flying became more ubiquitous and the demand for better-trained pilots to help fight in World War I increased at a faster pace, the concept of a flight simulator also increased.

What is a flight simulator?

A flight simulator is a device that attempts to replicate real-life conditions, environments, and situations which pilots will face once in the cockpit. The actual devices used for flight simulation have advanced in extraordinary measures in the 100+ years since their inception.

“Fueled by World War I and World War II, flight simulators progressed from aircraft which were suspended in the air from riggings to virtual ones that appear more like a video game and that are used today by military pilots, commercial pilots and video game enthusiasts alike,”  explains Marek Polčák, CEO at VRgineers.

To appreciate how far we have come, and yet how far we still have to go, let’s take a walk back through the development of the devices that have led to the modern flight simulators. Part I in this three-part series will cover the first 30 odd years from synthetic flight simulators to electronic ones.

The evolution of flight simulation

One of the flight instructors from the US Army explains the evolution of flight training, “The history of flight simulation is tied to the devices used in the lead up to what we now know and recognize to be flight simulators. Along the journey, the goal has always remained the same – how to train pilots in the most effective and quickest way, while still safely preparing them to have air under their butts?”

As we will see below, only the methods and access to the newest technologies used in the last century have changed. This is extremely apparent in the most advanced flight simulators, like the ISLE-LMS from VRgineers, the latest simulator to hit the market, utilizing cutting edge technology and the most advanced VR headsets, granting pilots a new level of situational awareness in their training unlike anything else out there. But more on that later. 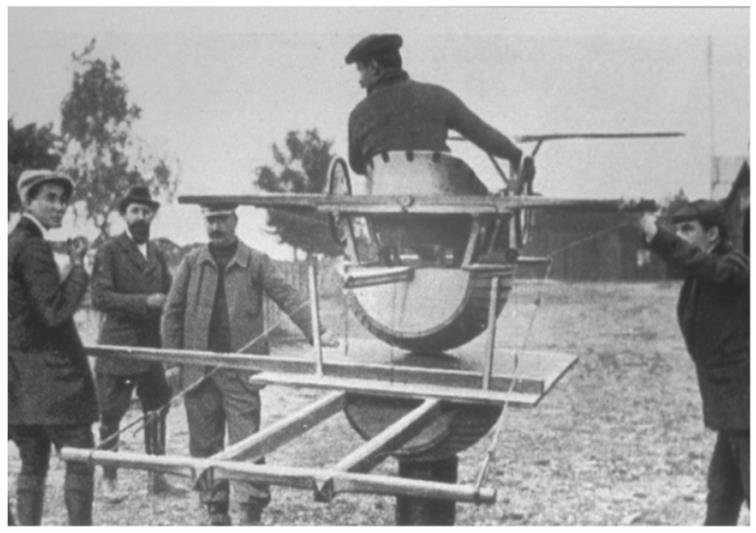 The first versions of simulated flight which could be categorized as simulators were rudimentary devices. They typically consisted of slightly modified aircraft, or ones attached to balloons, overhead riggings, or railway bogies. These soon progressed into devices that were tethered to the ground, yet capable of responding to aerodynamic forces, such as the Sanders Teacher or the Captive Monoplane, built circa 1910.

Other devices focused on representing the pitch and roll of an aircraft. And still, others developed during the demand for pilots in World War I sought to measure the reaction time of trainees.

Eventually, devices advanced to where the instructors were able to introduce disturbances in attitude to simulator difficult wind and weather conditions that the pilots might face. Among these, the most well-known and utilized was the Link Trainer, developed by Edwin Link, known as the ‘father of simulation’, between 1927-1929, and patented in 1930, advertised to the world as, “an efficient aeronautical training aid and a novel, profitable amusement device.” 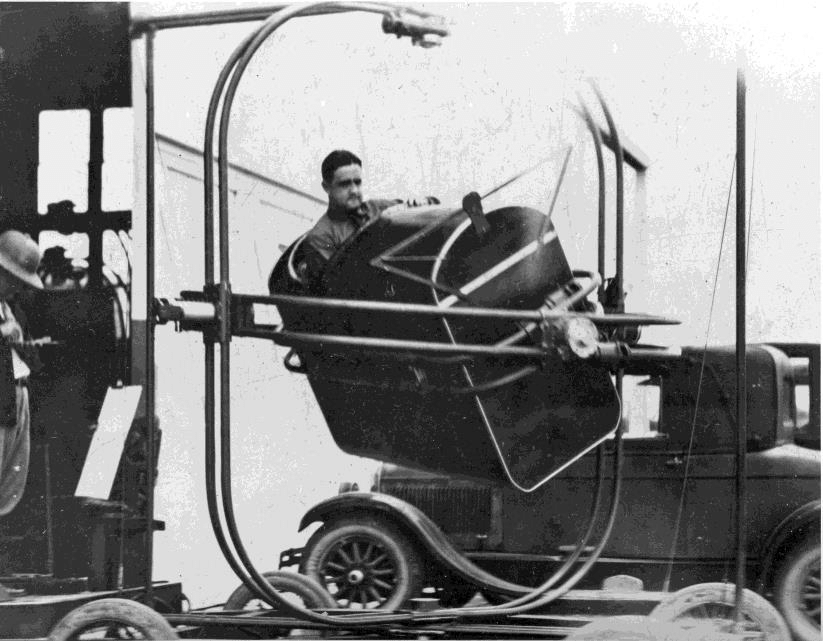 Just as these devices were becoming abundant, the push for ‘blind flying’ or instrument training came to the foreground. Some of these new trainers built onto pre-existing moving trainers, such as the Link Trainer, by fitting them with dummy instruments. Others developed as non-removable devices specifically invented for the task of instrument flight training.

The Link Trainer remained the dominant flight simulator through the 1930’s selling to a whole host of countries across the globe. American Airlines became the first commercial airline to purchase a Link Trainer in 1937.

Electrical and Electronic Methods of Simulation

Further development after the 1930’s consisted of advances in electrical and electronic methods. One such way was in providing a positive simulation of the behavior of radio navigation aids, as seen in Dehmel’s Trainer, by Dr. R.C. Dehmel. The Aerostructor (also known as the Guiairstructor when employed by the US Navy), by A.E. Travis, focused on employing a visual system rather than an instrument presentation, using a loop of film to simulate the effects of heading, pitch and roll movement.

As aircrafts became faster in the air and as the demand quickened for pilots in World War II, the need for adequate training became imperative. The Hawarden Trainer, made from the center section of a Spitfire fuselage, allowed pilots to jointly train the various procedures of a complete operational flight.

Edwin Link also developed the Celestial Navigation Trainer (CNT) in collaboration with P. Weems to improve the celestial navigation capabilities of the British pilots in WWII. The device could house several airmen and allowed for navigation based on either sky or ground references, as seen in the synthetic night sky above, or as projected below on a white screen. 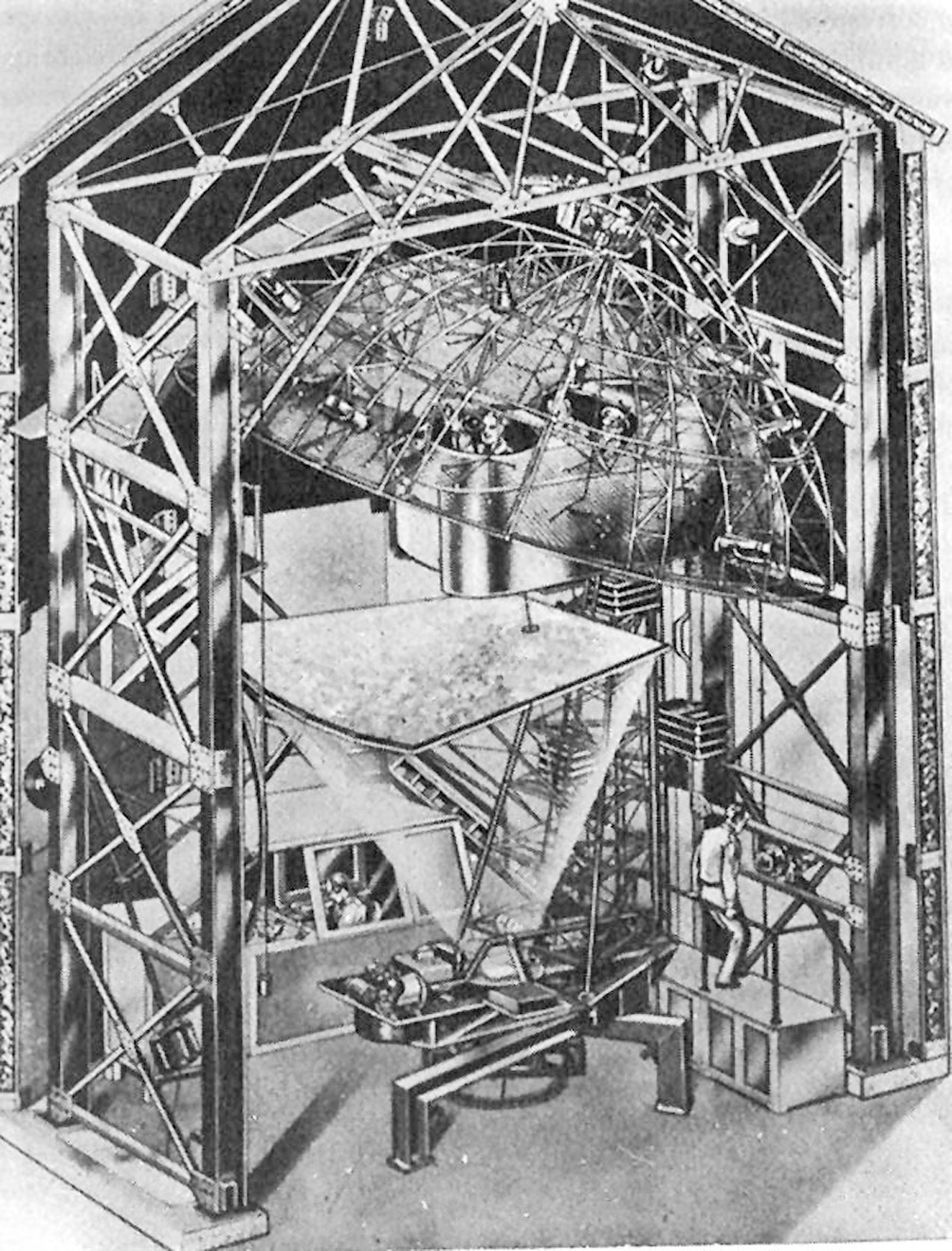 The 1940s also brought in a new developer of simulators, Rediffusion (or later Redifon), which created the C100 DF and Navigational Trainer, both of which were Crew Procedures Trainers. Many of these CPTs came equipped with sound effects and epidiascopes (machines that project images onto a screen).

Common issues throughout the history of flight simulators

The two largest problems that militaries, commercial airlines, and even some rather enthusiastic individuals have faced in flight training and when dealing with flight simulators are how to train pilots effectively and efficiently.

Effective training means designing and developing the best-quality, least time-consuming methods to get new pilots ready to get into a cockpit and flying solo. And in order to have effective training, the pilots must be training in realistic environments, experiencing situations, conditions and scenarios which will (nearly) match what they will experience once they are the ones in the cockpit.

The other problem that these same stakeholders face is efficiency. While in the early years of flight simulation the devices were quite primitive and therefore fairly low-cost, the same cannot be said for later models, including the CNT, which was 13.7 meters high and 7.9 meters across the base, and needed to be housed in an air-conditioned, eight-walled building.

Often due to space constraints and budgets constraints, the number of simulators is greatly outnumbered by the number of pilots who need to be training on a daily basis. This means that militaries and airlines are training at suboptimal capacity, only adding to the timeline in which they can fully train a pilot.

These are two of the most important issues facing the industry now and where there is the greatest room for growth and improvement.

“We have made it our mission at VRgineers to help ensure pilots are mission ready in less time, yet operating at a greater skill level,” says Polčák.

In Part two of our three-part series on the evolution of flight simulation, we will look at how the use of computers and image displays added to the increased effectiveness of pilot training.